Liverpool 5-2 AS Roma: Klopp had solutions, but Liverpool proved their weak point

Against Roma’s 3412, Liverpool settled up defensively as usual: 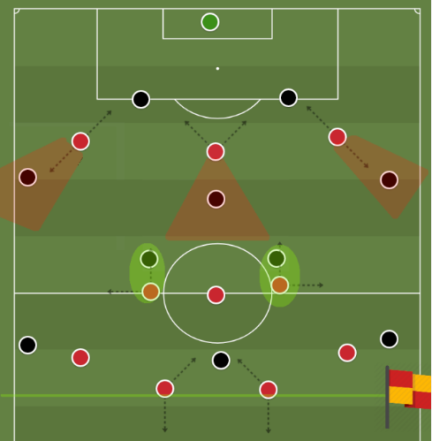 Reds are used to cause trouble to opposition using this organisation. But Roma’s back 3 were able to play out from the back with efficiency with 7 players involved (3 CBs + [De Rossi – Strootman] + [2 high wingbacks] )

Roma’ s organisation to play out from the back (3+2 / 3+4) opens pass angles: When Liverpool’s central midfielder press De Rossi and Strootman, Kolarov is reached, whereas Salah was ready to press high on Juan Jesus 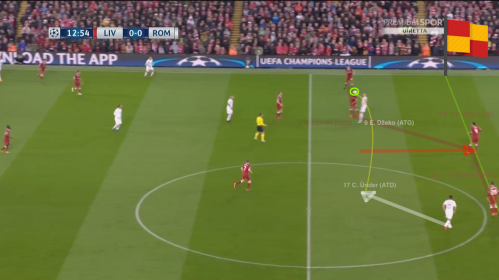 Liverpool’s back4 is low and cautious: Roma gain a lot of second balls when playing long to Dzeko

Liverpool issues against Roma play out from the back:

Once the second balls were won, Giallorossi could create interesting cross situations with a 3v3 situation in the box [Nainggolan – Dzeko – Ünder] v [Van Djik – Lovren + opposite full back].

Once again, Van Djik and Lovren stepped back and could contain Roma’s offensive animation and defending correctly on crosses, even though they gave up second balls.

Liverpool was recovering very low, and Mané was forced to step back against Florenzi’s offensive threat.

At the time of handling Liverpool’s clearances, the back3 [J. Jesus – Manolas – Fazio] (+ De Rossi) enjoyed a clear numerical superiority against Salah and Firmino and could be in control of defensive transition.

… Even though their positioning will then cause big troubles to Roma.

As they lined up with a back 3 and double pivot, Romanistas faced big troubles at the time they lost the ball, witch led to Liverpool’s momentum it the last 15’ of the first half, materialized by the opening goals of Mohamed Salah:

As Di Francesco admitted after Roma’s remontada against Barça: he got inspired by Conte’s 3-4-3/5-4-1 at the time of switching strategy before the second leg of the quarterfinal.

Chelsea’s high press in Camp Nou: Umtiti passes to Alba -> Moses goes up on the pass time and rest of the defence switch to a back4

In their offensive game plan, Reds used these defensive principles of Roma to create unbalance.At the time to play out from the back, they organized in some sort of asymmetrical back3. One wingback played higher, the other one as a 3rd center back.

Even when Roma could control the depth – by stepping back, or thanks to the opposite fullback coming near – those long aerial trough balls would put them in difficult situations to handle the offensive transition in their own side.

Roma could contain this plan in low block, but totally lost balance when pressing high/middle block.

Kolarov went high on Alexander – Arnold, which would trigger the trough ball to Salah, leading to Liverpool’s 3rd and 4th goal.

Those (vertical) positional play phases could be confused with counter-attacks: If the roman fullback was “already” high up the pitch, Liverpool’s ball holder would not hesitate to immediately play vertical.

As it was the case on defensive transition phases, De Rossi was often caught too high and unable to control the ball holder in the center of the pitch.

Di Francesco switched back to 4141 on the 68th minute after the 5th goal. Roma will then dominate the game, and materialize this momentum with 2 goals, and many chances. 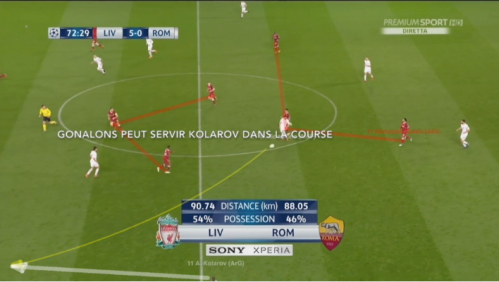 Roma’s high pressing was less intense in the last 30’ of the game: Moh Salah drop’s Kolarov and Gonalons can reach him 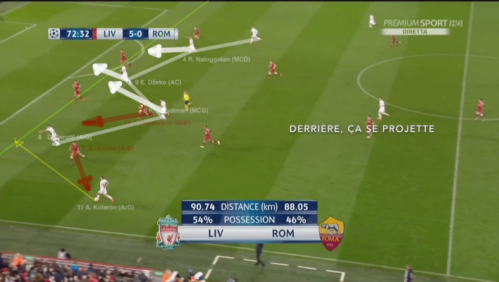 Kolarov reaches Perotti in the depth, while the 4 other offensive players attack the box 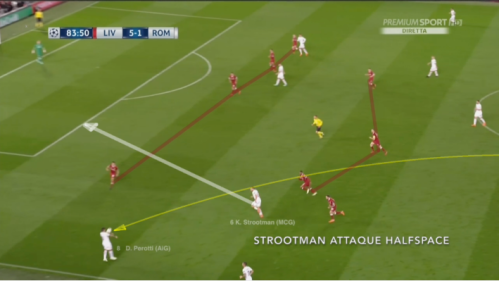 Strootman moves up in the left halfspace, whereas Perotti stretches the defence. His left footed cross will reach Nainggolan for the 2nd goal.

As seen in the beginning of the game, Liverpool’s midfield structure has a tendency be a bit flat. The midfield 3 is more willing to compensate on the flanks, than behind, to help the defence.

Roma will enjoy a lot of second balls on the crosses and it will create various chances, including Nainggolan’s one, before the 5-2 penalty.

Klopp prepared well – Di Francesco got things back on track

Once again, Jürgen Klopp proved his ability to provide solutions to his team, according to precise characteristics of opposition.

Offensively, defensively, and on a offensive transition, his unit had solutions to disorganize Roma’s 3412.

Nevertheless, the first 30’, as well as the last proved Reds’ tendency to step back too much, defend too low, and concede second balls to opposition. Jose Mourinho’s Manchester United used this to beat Liverpool in the Premier League.

Will the Dzeko – Schick partnership and this relative weak point of Liverpool be enough to turn things around in Roma?