Mauricio Sarri’s Juve were able to control the game against Inter, and comeback home with a precious win from Giuseppe Meazza, against Serie A leader. Juve’s offensive movements and organisation prevented Conte’s Inter from establishing their usual defensive and territorial control. 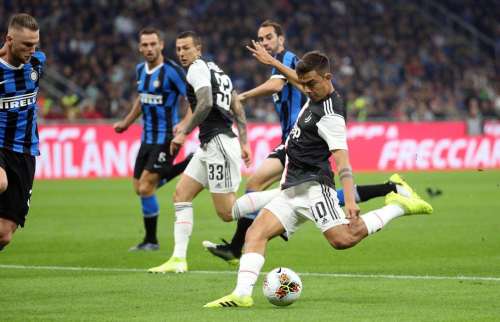 As it was the case versus Barcelona few days before, Inter were initiating their pressing in 3412. This defensive display allowed them to set high pressure (3v3) on Pjanic, De Ligt and Bonucci with Sensi and the attacking duo Lukaku – Lautaro.

Then, central midfielders Brozovic and Barrella were very agressive on Matuidi and Khedira, almost man-marking them.

Inter’s back3 were then theoretically without a spare-man vs Bernardeschi, Ronaldo and Dybala. But Conte would count on his back5 « sliding » so that the opposite fullback (Asamoah, if Alex Sandro has the ball) would come and tighten the block, providing numerical superiority, and D’Ambrosio would go up and press the ball holder.

Sensi remains close to Pjanic / Lukaku – Lautaro are tight to Bonucci and De Ligt. When the ball comes to Alex Sandro, D’Ambrosio goes up. Offcamera, the 4 defenders remaining slide the ballside.

Since their first offensive movements, Juve were able to respond coherently to Inter’s 3-5-2.

As seen in the video and schemas above, Dybala is tracked by Skriniar on high pressing. By dropping back to their own part of the pitch, Dybala and Ronaldo have been drawn away from their confort zone (halfspace, in their own part the pitch).

Argentine and Portuguese forwards were able to make a difference on their first touch. By their movements. They denied Inter from their usual control on high pressing.

They were not only avaible for a short pass in the feet, and could also be reached in the depth. 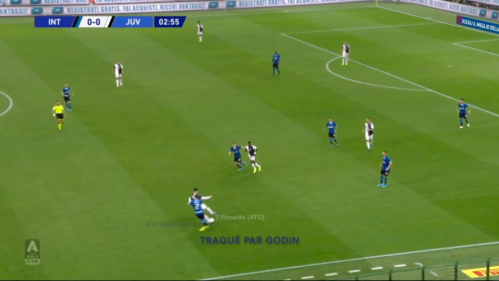 Godin commits a foul on Ronaldo as he was dropping back, and eventually served in feet

Godin and Skriniar were forced to act in a context where a (low) center of gravity would be more important than upper body power in a duel (shoulder or aerial). Inter right and left center back have taken to deep waters by Dybala and Ronaldo. As they were deprived of any form of covering by Juve’s offensive movements. 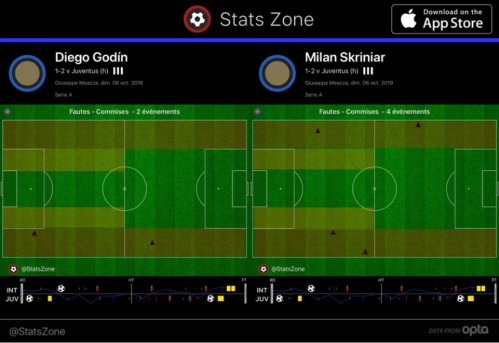 Fouls commited by Godin and Skriniar, taken away from the halfspaces, and from their own part of the pitch, by Ronaldo and Dybala

As he was marked tight by Sensi (then by Brozovic), the Bosnian had to play in one touch when Inter’s pressure dictated it. The young Dutch centreback also had to prove his passing speed to play long under pressure, notably on the play before Ronaldo’s shot on the crossbar (8′). 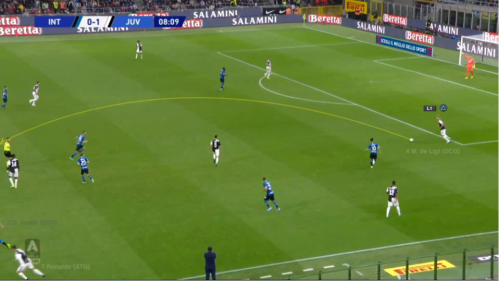 Ronaldo drops back, then brutally cuts back in the depth. Godin is done for pace. It follows therefore a massive shot on the crossbar by the Portuguese forward.

Once they were served, Juve’s forward could then exploit the runs of their teammates, to occupy the Inter centerback that should have (been able to) cover.

On the opener, the 1on1 situation offers Dybala a chance to shoot. This situation was made possible by Bernardeschi’s run, occupying Godin. De Vrij was too high as he went up (out of time) on CR7 dropping back, a few seconds before.

When Ronaldo hits the crossbar. It’s Dybala who makes the run which occupies De Vrij.

Barella and Brozovic’s tight markings on Matuidi and Khedira also opened some pass lines, straight to the forwards, as Pjanic’s pass to CR7, when Juve were building the opener.

Although their balance was precarious, Inter sometimes answered coherently to those situations of numerical equality, using their defensive alignement. Offside trap would allow them to avoid (narrowly) CR7’s 2-0 goal, on one their numerous central attacks, in the 40th minute.

Juve in control of their defensive transition

Facing Inter’s low blocks sequences, the vertical runs produced by Juve’s central midfielders Matuidi and Khedira (and later on, Emre Can) also upset the defensive logic of Conte’s 5-3-2. By constantly running forward, Juve’s 8s caught the attention of the centerback in front of them. It would prevent Godin and Skriniar (then Bastoni) to cover their fullback, and it prevented the centerbacks to cover each other, as they didn’t have anymore numerical advantage.

Their forwards run were complementary to Dybala’s (then Bentancur’s) backward movements movements, as they were more able to dictate the play with the ball in their feet than the French and German man. The runs of Juve’s central midfielders were diagonal: they allowed Sarri’s team to take one central defender away from the center of the pitch. Therefore, there would be no covering for the 2 center back left inside.

Juve would then constantly threaten the depth, until Higuain score the winner, as Khedira had provided the numerical equality. 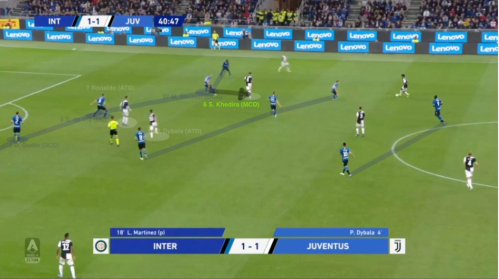 Khedira runs up (and toward the touchline) to occupy Skriniar. Ronaldo and Dybala would soon combine to create the 2-0 chance of the 40th minute.

On top of the goalscoring opportunities, these forward runs made Inter’s block retreat, allowing Juve to set long playing times in Inter’s part of the pitch. This dominance would be quantified by numbers: 59% of possession in opposite side for Juve, as Inter had 51% off strict ball possession. 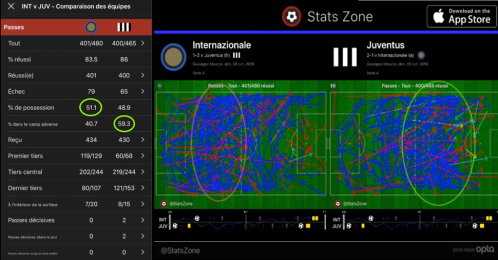 Clear territorial dominance by Juve, thanks to their offensive setup and – therefore – to their defensive transition

After Sarri’s changes, this same offensive display would lead to the winning goal of Higuaìn.

Emre Can (right CM) runs trough and drags Bastoni away from the centre of the pitch, in order to restrict Inter from benefiting a numerical superiority at the back, despite playing a back3.

Bentancur (number 10, after Dybala was subbed), assists Higuain for the win. At the time he runs trought – after combining with Ronaldo – Skriniar has to go up on him. De Vrij was already out (eliminated by Ronaldo timed pass). Bastoni then orientates his body to cover Skriniar, and Higuain is served in his back, onside.

No numerical advantage for the back3 would mean no covering. And there would be one (Bastoni) it would mean a free player (Higuain).

The other key feature that made this dominance possible was the discipline of the fullbacks (yet offensive by nature) Alex Sandro and Cuadrado.

While developing their positional attacks, Juve still adapts to Inter’s 3-5-2: The opposite fullback would remain in a narrow position, ready to help Bonucci and De Ligt when the ball would be lost, as Lautaro and Lukaku are pretictable targets for Inter’s counter attacks in their defensive display.

Sarri would then reproduce (defending 4312) the signature move of Conte, what Germans call « Joker Pressing ».

We were able to witness this move on Juve’s opener : When the ball was lost, Alex Sandro quickly attacks D’Ambrosio, as Cuadrado was already stuck to Bonucci in the halfspace.

On this type of defensive transitions, Pjanic was also crucial, compensating his lack of impact by a smart positioning, always able to cut passing lanes, to stop Inter’s counter attacks.

Still De Ligt and Bonucci had to handle 2v2 situations vs Lautaro and Lukaku. The Italian defender shown his great backward defending ability. The same doesn’t go for De Ligt, guilty of a handball on Inter’s equalizer, and close to an own goal on Vecino’s shot (68′), while Juve were suffering.

Lukaku was unable to take advantage of these opportunities, and lacked mobility to create differences by changing rhythm.

Once, the ball was recovered, Juve would stick to the same logic, and try to reach the forwards as quick as possible (Pjanic on the opener), to combine quickly and restrict Inter from controlling the depth.

As it was the cas versus Emery’s 352 in the last Europa League final, Sarri was able to adapt to Conte’s 352, and his team eventually controlled the game. For a few inch/seconds, his team could have score 3 goals at halftime.

Even though Juve went trough a downtime in the second half, and beside there is still a room for improvement on a defensive point of view (Cuadrado / De Ligt), his plan worked.

Criticism were often expressed for his teams being too predictable (even from his own players), but it has to be noted that the Mister has shown a great level of adaptability. He was the one who understood opposition’s game plan, and eventually made the necessary adjustments, in this Italian Derby.