The most anticipated game of the Champions League last16 has kept its promises. In term of both entertainment, and tactical opposition. Bayern produced a stunning performance in the first half, exposing the quality and singularity of Guardiola’s game plan: intense pressure to recover possession, with adaptation to Juve’s offensive animation; and efficient positional play, surrounding Juventus bloc restraining any possibility of offensive transition for the Italians. Logically, the first half ended with Müller’s goal. 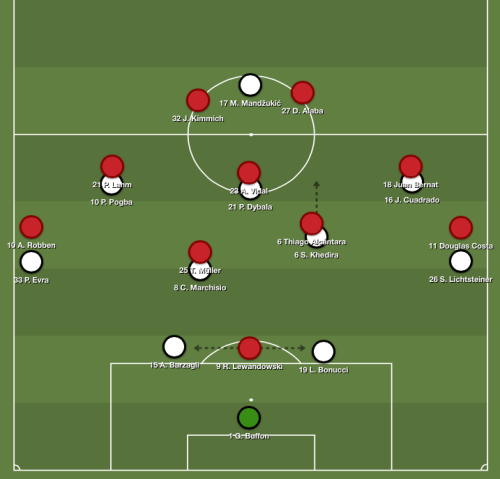 If Bayern had kept that shape no matter how Juve’s acted with the ball, Italians could have easily play out from the back, with Bonucci – Barzagli – Marchisio enjoying a numerical superiority against Lewandowski and Müller (3v2, or 4v2 including Buffon).

Bavarians then had a special plan to handle Juve’s salida and preventing them entering Bayern’s side properly, by short passes.

When Allegri’s men positioned themselves to play out from the back (defenders occupying the width and Marchisio dropping in-between the central defense), then Müller dropped Marchisio to press Barzagli, Thiago dropped Khedira to press Marchisio, as Lewandowski was now focusing his pressing on Bonucci to create a 3v3 situation to block Juve’s building from the back.

Therefore, Khedira was likely to be the “free man” of this defensive animation, but Lewandowski’s pressing on Bonucci was enough to “plug” the pass angle to Khedira, in addition to the possibility for Costa to get his marking back. If Juve was able to break this pressing, Thiago then got back to Khedira and Muller to Marchisio as Bayern would go back to 4-1-4-1, because Juve were now entering the second third of the pitch. 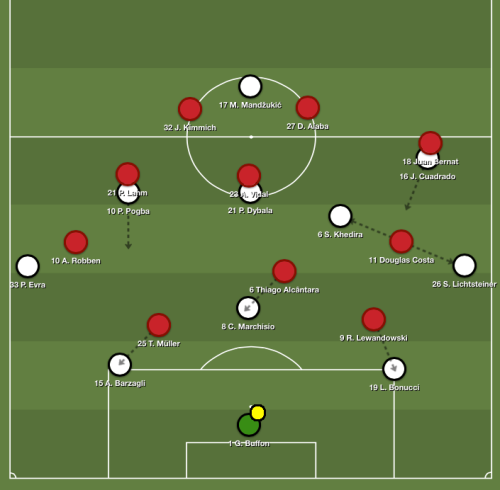 Bayern’s 4-1-3-2 against Juve’s building out from the back: Thiago pressuring Marchisio when Müller pressuring Barzagli. Lewandowski on Bonucci to create a 3v3, rather than 2v3

Quickly, the only option left for the trio Bonucci – Marchisio – Barzagli was to choose Cuadrado or Pogba back to the goal. Colombian and French prove solid and strong under Lahm and Bernat’s pressures, as they show great technique to get rid of Bayern’s pressing, and then force Germans to step back behind the ball. Juve’s positional play could finally be set up.

Thanks to this defensive game plan, Bavarians will enjoy a almost total control of the depth and excellent defensive transition in opposite side (a fact that will be important on the opening goal).

This control was also due to Bayern’s territorial domination, a consequence of their positional play.

Bayern’s building out from the back in 4-3-3

Playing out from the back is the first step of Bayern’s positional play. The back 4 [Lahm – Kimmich – Alaba – Bernat] occupies the all width of the pitch, and Vidal drops back between the CDs as Busquets would in Barcelona. Thiago and Müller act as central midfielders to create a 433 formation in order to offer Bayern the possibility to build properly from the back, by short passes and triangulations, before settling in opposite side.

This aim would quickly be reached by Bayern from the beginning of the game, before settling in Juve’s side for almost an hour, also thanks to the quality of the work to recover the ball, as described before.

However, the last half-hour will demonstrate how important this phase of the offensive game plan is, and we’ll be back on it in the analysis the second period. 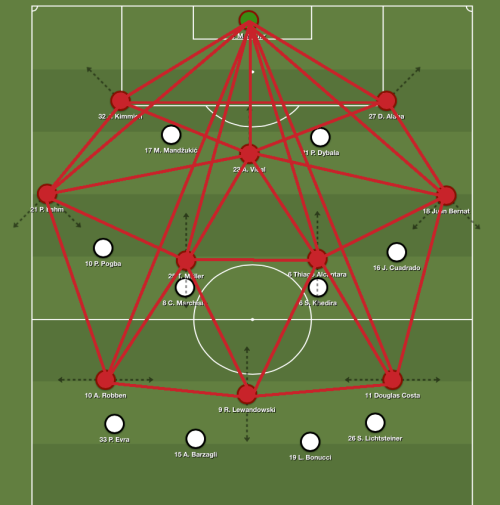 Once Bayern settled in opposite side, they organize with the system that labeled them under Pep Guardiola’s direction: 2-3-5:

Guardiola’s purpose was clear with this approach : the Spaniard wants to position a man in every “corridor” of the pitch : Right wing – Right half-space – center – Left half-space – Left wing (from Robben to Costa in the figure below). Counting on the fact that central defenders and central midfielders don’t stand on the same vertical line, Kimmich and Alaba were offered various pass angles to step over Italians’ midfield line.

With so many attackers (5), creating a local superiority around Juve’s box became possible for Bayern. It forced Italians so step back in numbers, preventing them from any possibility of counter-attacking, and ensuring Bayern’s territorial control, as Bavarians multiplied playing time in Juve’s side. 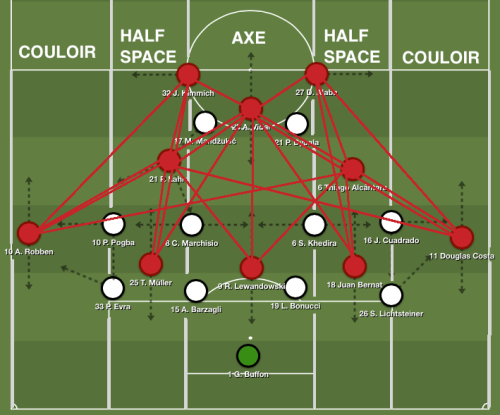 Bayern’s positional play in opposite side, and pass angles generated by the 2-3-5 organisation. Allegri’s men have to fill the gaps moving from left to right, at the risk of creating a disorganization at the time of finishing (final defensive intervention for Juve).

On both wings, Robben and Douglas Costa had a very important part to play, offering maximum width on the side of the ball. As it happens when Juve defend with 5 men, they were almost man-marking opposition’s wingers: When Costa or Robben received long diagonal passes from Alaba or Kimmich, Evra or Lichsteiner would then step out of their unit to face them as close as possible.

When the ball is in Alaba or Kimmich’s feet against a low Italian block, Bayern’s final aim is to find Müller/Lahm or Thiago/Bernat in the half-space on the side of the ball by a vertical pass, in order to penetrate opposition’s box and create a chance, witch will soon come with 3 central attackers. Robben and Costa made all this possible and by dragging a wingback far from the center of the pitch.

An example of local numerical superiority created by Bayern thanks to a vertical pass by Kimmich (12’).

At this particular time, Pogba and Cuadrado’s part is fundamental: it is their job to fill the gap between the central defender and the fullback of Juventus that has been out to defend on a winger, far from the box. If they don’t, Marchisio or Khedira will do this job. This covering is a crucial issue: if the half-space is not filled by a Juventino, Bayern will find a numerical superiority around the box, witch of course represent an enormous danger.

That is what happens on the 12th minute, with the big chance missed by Müller and Lewandowksi, standing against Gigi Buffon, with all defenders off: Lahm gets in the right half-space, between Evra and Barzagli (this space was created by Robben, dragging Evra with him). That is why Kimmich intelligently played vertical to Lahm, rather than going back to the other wing, via Alaba (see video below). 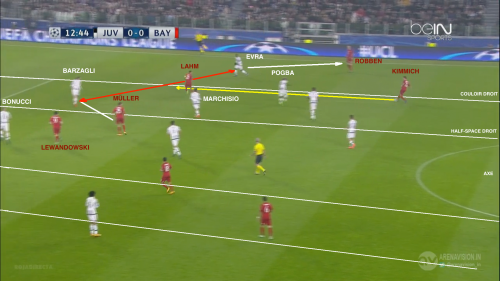 Evra is dragged far from Barzagli by Robben occupying the width. Kimmich is not charged and nobody gets back to marking Lahm in the right half-space: Bavarians create a 3 against 2 situation in the box on their 3rd possession of the game

On all the sequences before the one mentioned above, we can see Kimmich taking in account a lot of info:

If all the answers to these questions are negative, then Kimmich would switch the play to the other side to Douglas Costa, via Alaba. Possibilities would then open for Bayern as Juve’s unit would have massively been “shifted” on the right side.

Using this attacking structure, multiplying the switching plays is a efficient weapon for Bayern: when Kimmich finds Lahms (in the picture above) the ball has already gone right – left – right before (re)arriving in Kimmich’s feet.

At the time Lichsteiner goes out on Costa after the first switching of play, Bayern’s positional play has already mad damage: a 15m gap is created between Lichsteiner and Bonucci. Up to Cuadrado and/or Khedira to fill it, at the risk of losing consistency for the midfield.

Disorganization is created when Juventus move from stepback to defense (Defense is theorically 3 phases : Pressing, stepping back, and defense). It creates possibilities for Bayern at the time of finishing:

In any case, if the positional play was neutralized, Juve has no chance to counter attack with so many players involved in positional defense in their own last 1/3 of the pitch.

The first 15 minutes were a mix of all theses ingredients of this vicious circle of disorganization. It would have been logical that is was concluded by a goal, on Müller and Lewandowski’s chance. Still, Bayern proved patient, as Italians worked very well defensively in their own side. Finally, Bayern’s defensive transition in opposite side made a difference: on the only sequences that saw Italians counter attack in numbers (5 players) they were finally punished by Muller for not having been enough players to produce a good positional defense against Bayern’s numerous attackers.

This massive first half performance by Bayern highlights the quality of their positional play. The opponent is left without any offensive transition, but also and more importantly: they concede chances/shots. Besides width occupation provided by Costa and Robben, the main tactical point of this 235 organization is a massive and numerous occupation of the opponent’s pitch.

Using 3 midfielders, 2 center backs and 3 central attackers; Guardiola positions 8 players in the center of the pitch (in the tweet below, he concludes by saying “I want a lot of players in the center of the pitch, where they can combine). The crucial strategic stake of a dangerous ball possession, leading to a real control, even against a well organized team sitting very deep on the pitch.