Leading the Belgian Pro League with a one point-advantage over Anderlecht, Michel Preud’homme’s Club Bruges are also making a remarkable run in the Europa League this year. Amongst defensive rigor and offensive flexibility, here’s a list of the Belgian side’s strengths before the first leg against Beşiktaş. 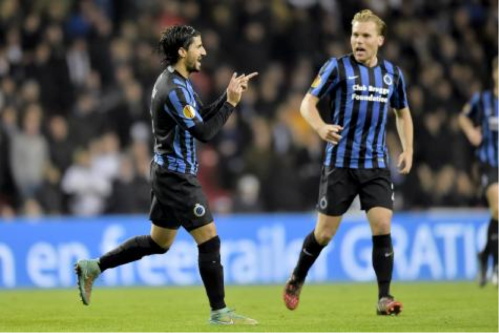 Coaching Club Bruges since 2013, Michel Preud’homme has built a flexible and competitive team. Leading the league with 55 points in 28 games, Club Bruges offer an attacking and ball possessive football, but still can demonstrate a great adaptability if the opponent enter the field with the ambition to thwart this plan.

Three ingredients allow the team to express this flexibility in the game: width, availability and verticality. Author of a very convincing European campaign so far, the Blauw and Zwart surely produced their best performance of the season in Copenhagen, during the group phase, winning 4-0 at the Danishes’.

Width and availability to play out from the back…

Facing the aggressiveness of the team led by Ståle Stolebakken, Club Bruges have used these offensive virtues to annihilate the opponent’s pressing before punishing that audacious approach in the last third of the pitch.

Thanks to their offensive talents – including Israeli winger Refaelov, prominent that day – but primarily thanks to the numerical equality they managed to produce against the opposite back4.

When they begin to build their play, the first collective ambition of Club Bruges is to stretch the opponent’s block. The fullbacks De Fauw (left) and Meunier (right, and former striker) get as close as possible to the touchline. In the heart of the midfield zone, Ruud Vormer and Victor Vasquez drop-in from from their initial positions and transform the 4231 into a more 433ish formation for a first phase of construction that means to be clean, and made of short passes.

The availability of Vasquez – raised at La Masia, and technical leader of the team – is a key output of the almost Lavolpista play out system, putted in place by Michel Preud’homme.

In the video below, we can see Vasquez moving at several places of the pitch to offer various solutions to his defenders to get the ball out, and also help Simons (alone in front of the defense) to free himself from tight man-marking witch are often offered to him.

Lior Refaelov, which should eventually start as number 10 instead of Spaniard next Thursday, will have to demonstrate the same mobility. 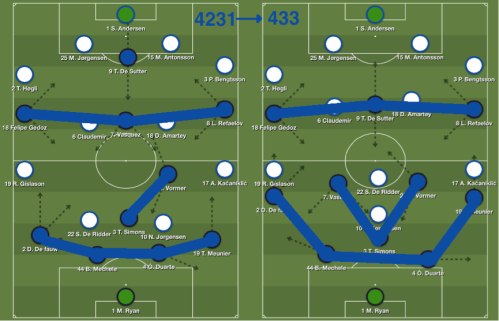 … Verticality to get out, numerical equality to punish

Once the pressing was contested through the width of fullbacks and backward movement of the midfielders, Club Bruges move back to 4231 system, in order to be effective in the last third.

With great pragmatism and situational intelligence, the keeper or the Belgian defenders immediately kicked long balls the get rid of the Danish pressing. Than, the ability of players to join the attack puts the opposing defense under pressure and eventually makes them step back.

Central midfielder alongside captain Timmy Simons, Dutchman Ruud Vormer, is both valuable by its backward movement to help getting the ball out, as for his vertical projections to join Tom de Sutter, to face the 2 opponent’s central defenders.

At the time to play long, the back-to-the-goal ability of Tom De Sutter is also a solution to enhance long balls. This schema can even escalate if Obbi Okoro starts. He’s even more powerful and efficient in the air, as proved his header goal, opening the mark against Aalborg in the previous round.

The great strength in Preud’homme’s offensive animation is here: he managed to produce a good mix between two approach:

Once the numerical equality is produced, thanks to this flexibility in the play out, the 4 against 4 situation allows the combination, and than eventually, the shoot to goal.

Moreover, it is noticeable that these movements are almost always concluded by shots; distant, if necessary. As prove their 47% (47!) of shots produced from outside the box in the European Cup. Illustration in Allborg in the last 32 with Refaelov’s masterpiece, from the axial position he shall occupy, since Vasquez is injured.

Even thought being very likely to get to the box in the offensive phase, Ruud Vormer’s ability to shoot from long range is a valuable offensive asset for the Belgians if the defense steps back. 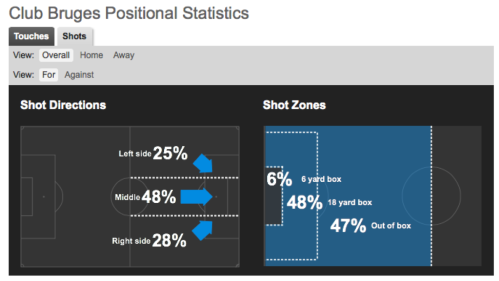 On the paper, the Belgian team comes in 4-2-3-1, even though this schema can change depending on the number of forward in the opposing team, in the same logic as Marcelo Bielsa with Marseille or Chile.

Against Torino in the first stage, or Aalborg in last 32, the Belgian technician adapted to the opposing attacking duo by starting a back3. That situation should not occur against Beşiktaş: Demba Ba being most often left alone at the forefront of the Black Eagles’ attack.

Just like the Argentine technician, Michel Preud’homme based his defensive balance on the presence of a spare man in defense, with individual man-marking on the rest of the field. That said, the block is not that high, and the pressing is not suicidal.

Preud’homme’s men didn’t prove a lot of defensive weaknesses in Copenhagen, but still experienced some moments of floating. On the wings, the markings of the Bruges wingers (this day Gedoz and Refaelov) is not always impeccable, and if the opponent wingers take the fullbacks away from their area, space can be created in their backs (see video).

If Club Bruges’ opponent start in 4231, as in the case of BJK, Simons will have to mark José Sosa (or maybe Arslan ?), then Mechele and Duarte will have to handle Demba Ba.

Simons, 38 years old and captain of Club Bruges, is the basis of the balance of the team. At the same time on the offensive plan for its importance in the first pass, and on a defensive point of view, for the axial overlap which he is the guarantor of.

On the video below, we can see him being dragged out of his area to get back the marking of a midfielder after Refaelov let him go. Domino effect will offer a striking position to the Danish.

This season, Bruges have lost only 3 times in the Pro League, but already twice in February. When they play with 4 men at the back, Simons ensures the 3 against 2 situation by his defensive cover.

Obviously, if an offensive player happens to slide into his back and get free from his surveillance, this balance no longer exists. It is what came to realize Thomas Matton for Kortrijk during their 2-0 success over Pro League leaders. An offensive key for the Black Eagles ?